While the Dick Clark Caravan of Stars tours were not the first rock n' roll package tours, they are certainly the most iconic. Known for their low pay, tight tour schedules and modest accomodations (usually a Continental Trailways bus), the Caravans served as the jumping off point for many rock 'n roll performers in the late 50's and early 60's.  Here's a typical Caravan of Stars bus interior. 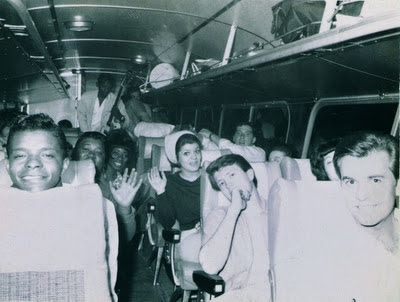 Today's post looks at the first full scale Caravan in 1959.  Dick Clark has proposed a tour in 1958 but things didn't work out.  He next tried a few shows in the late summer and hit a goldmine, which led to a full slate to shows in the fall.

Clark's Caravan sold out the Bowl with over 5,000 being turned away.  Variety reported that police set up loudspeakers six blocks away to tell people the show was sold out. It set an all-time attendance record.

Another huge success as the show set another attendance record by over 15,000 over the previous record in the fair's 110-year history.

No sooner did GAC book a full tour from September 18 through November 8 with the Caravan's debut in Baltimore than problems arose.  The Boston Garden, site of the Caravan's second show was being used for a hockey game earlier in the afternoon and GAC decided that they didn't want to go through with the show under those circumstances.  Instead, Tim Gale of GAC booked a replacement show in Scranton, PA.  Boston was a lucrative stop for any rock 'n roll show in the 1950s so the loss was not looked upon as a good omen. 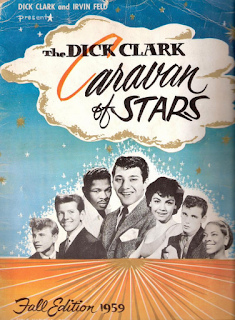 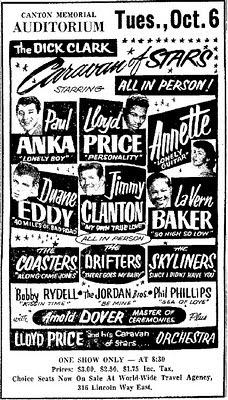 Municipal Auditorium,
The Caravan gains its first negative notoriety when midway through the show, fights break out amongst the 12,000 plus audience and police moved in to break up the melee.  In all, 49 men were arrested ranging in age from 17 to 50 for disturbing the peace and public drunkeness.  Although Dick Clark was not at the show, his association with the show drew lots of press and he held a news conference in New York to defend the Caravan.  He denied that the performers were responsible for what happened and said, "What happened was certainly unfortunate, but it only reflects the attitude of a few of the thousands of people there."


Municipal Auditorium,
The cast hosted an on-stage birthday celebration for Annette Funicello.  Although San Antonio had an additional 25 officers on hand, there was no trouble.


Police Chief Milton Winslow cancelled this show in the aftermath of the KC arrests.  Minneapolis had encountered four violent rock 'n roll shows in the past year.  "I am certain violence will occur again," he told the Associated Press.


I still have a few shows to locate since the tour was reportedly booked until November 8, but this gives you a flavor.  If you have any additions or corrections, please let me know.
Posted by Jerry Fuentes at 9:55 AM 11 comments: